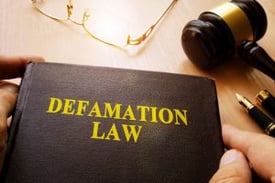 Dozens of states have passed Anti-SLAPP (Anti-"Strategic Lawsuit Against Public Participation") laws to discourage meritless defamation claims (or similar claims) filed to quiet speech or to intimidate speakers. As of June 2019, 29 states had passed such laws. Although the laws vary in form, they may, for example, provide early procedural obstacles for defamation claims or grant a remedy – such as attorney's fees – to defendants who file successful motions to dismiss on those claims.

Somewhat bucking this trend, the Southern District of Florida recently held that Florida's Anti-SLAPP statute can entitle a defendant to attorney's fees in federal court when the defendant demonstrates: (1) the plaintiff filed claims that were "without merit", and (2) the lawsuit was filed "'primarily' because the person against whom the suit was filed exercised the constitutional right of the speech in connection with a public issue." Bongino v. The Daily Beast Co., LLC, No. 19-14472-CV-Martinez-Maynard (S.D. Fla. Aug. 6, 2020).

The plaintiff, a political commentator and online personality, sued The Daily Beast (an online media outlet) for defamation, commercial disparagement, and violating Florida's Deceptive and Unfair Trade Practices Act. The claims stemmed from an article published by The Daily Beast about the plaintiff's exit from NRATV, a channel run by the National Rifle Association. Plaintiff did not respond to requests for comment until after the article was published, but the article was updated to reflect the plaintiff's position that he made the decision to leave the network. Plaintiff claimed that implications in the original article that he had been fired or let go from the network were defamatory and disparaging.

The defendant filed a motion to dismiss on all of the claims, which the Court granted. The Court then turned to whether the defendant was entitled to attorney's fees under the Florida Anti-SLAPP statute. The Court distinguished Florida's statute from those at issue in other cases, finding that Florida's statute "is a garden variety fee shifting provision," as opposed to other statutes that raised a plaintiff's pleading burden. As further support, the Court relied on Eleventh Circuit caselaw enforcing state law fee-shifting provisions in a number of contexts.

The case above illustrates that a state Anti-SLAPP statute that simply grants a defendant a right to attorney's fees should be enforceable. Other statutes – such as those that require a plaintiff to show a likelihood of success on the merits in a special proceeding – are less likely to be enforceable in federal litigation. These disparate results could encourage forum-shopping by plaintiffs who seek to quiet speech without risking sanctions.

Until Congress adopts a federal Anti-SLAPP statute, the usefulness of those statutes in federal court will vary widely based on each statute's specific language.