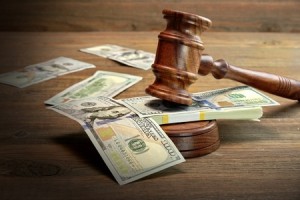 The United State Patent and Trademark Office ("PTO") has aggressively litigated its position that anyone who challenges the PTO's denial of a patent application in federal district court should lose even if he wins:  that is, the PTO contends that the applicant has to pay the PTO's attorneys fees regardless of the outcome.  The statutory language on which the PTO relies requires payment of the PTO's "expenses"; the PTO argues "expenses" includes attorneys fees, in the form of pro rata reimbursement of the salaries of its staff attorneys.  On July 27, 2018, the Federal Circuit Court of Appeals, sitting en banc, in Nantkwest, Inc. v. Iancu, decisively rejected that argument, but in doing so created a circuit split that may require the Supreme Court to address the issue.

In Nantkwest, the Plaintiff was denied registration of a patent by the PTO.  Rather than appealing the denial of the administrative ruling to the Court of Appeals for the Federal Circuit, Nantkwest opted for the alternative allowed by 35 U.S.C. Section 145, which is to file a civil action against the PTO in district court challenging the denial of patent registration, which action can be filed in the applicant's home district.  See 28 U.S.C. Section 1391(e)(1)(C) (venue over action where defendant is a federal employee or officer).

The Section 145 proceeding is a standalone civil action, not an appeal.  In Kappos v. Hyatt, 566 U.S. 431 (2012), the Supreme Court rejected the PTO's argument that the district court could not consider new evidence in a Section 145 action.  The Court ruled that Section 145 permitted introduction of any new evidence generally permitted in federal court.  Thus, Section 145 permits an applicant to choose to forego introducing evidence at the administrative stage that, as a tactical matter, is more suited for consideration in a civil trial court setting.  The applicant can also introduce additional types of evidence, such as live expert testimony, that the PTO generally does not accept.  Hyatt, 566 U.S. at 435.  The Court further held that, if new evidence is before the district court, the court "cannot meaningfully defer to the PTO's factual findings" because the PTO will have "considered a different set of facts."  Id. at 445.  Therefore, the district judge in the Section 145 action essentially considers eligibility for a patent on a de novo basis, giving the PTO's rejection no weight.

Hyatt satisfied the PTO not at all.  To discourage rejected applicants from taking the Section 145 route, the PTO urged a novel interpretation of Section 145's provision shifting all "expenses" of the proceeding to the applicant, regardless of the outcome:  "[a]ll the expenses of the proceedings shall be paid by the applicant."  Prior to Hyatt in 2012, the PTO's attorneys had never sought attorneys fees as "expenses" under Section 145.  After Hyatt, though, the PTO began arguing that it was entitled to reimbursement of a pro rata share of salaries of staff attorneys as part of the expenses to which the PTO is entitled under Section 145, knowing that the burden of paying the PTO's attorneys fees considerably lessens the practicality of pursuing a Section 145 action.

However, in Nantkwest, by a 7-4 vote, the Federal Circuit sitting en banc ruled that Section 145 does not compel patent applicants to pay the PTO's attorneys fees, because "the American Rule prohibits courts from shifting attorneys' fees from one party to another absent a 'specific and explicit' directive from Congress.  The phrase '[a]ll the expenses of the proceedings' falls short of this stringent standard."  Slip op. at 4 (alteration in original).

It is an interesting commentary on the latitude courts have in statutory interpretation that there could be even four votes that the statute allows attorneys fees.  The statute does not expressly mention attorneys fees and, under "the bedrock principle known as the American Rule:  Each litigant pays his own attorney's fees," unless there is "explicit statutory authority" for fee shifting.  Baker Botts L.L.P. v. ASARCO LLC, 135 S. Ct. 2158, 2164 (2015) (internal quotation marks and citations omitted).  Here, the statute did not explicitly say "attorneys fees," but expenses, which are different.  Also, as the majority in Nantkwest (slip op. at 20)  pointed out, in those instances where Congress has defined "expenses" to include attorneys fees, it has done so expressly, e.g., 28 U.S.C. Section 1447(c) (an order remanding a removed case "'may require payment of just costs and any actual expenses, including attorney fees'") (quoting 28 U.S.C. Section 1447(c)).

In short, Congress knows how to write a statute to award attorneys fees:  by expressly using the term "attorneys fees."  Thus, similar to a supposed rule in politics -- that, "if you're explaining, you're losing" -- if you have to construe or interpret a federal statute in order to conclude it implicitly allows an award of attorneys fees, then it does not.

The dissenters in Nantkwest, though, cited Shammas v. Focarino, 784 F.3d 219 (4th Cir. 2015), which interpreted the identical "all the expenses" languages in the statute governing district court challenges to the PTO's denial of a trademark application (15 U.S.C. Section 1071(b)(3)) as including attorneys fees.  The court in Shammas reasoned that the American Rule doesn't apply in this context, because the American Rule concerns itself with a fee award to the prevailing party, and under 15 U.S.C. Section 1071 (and 35 U.S.C. Section 145) the applicant bears the burden of "expenses" no matter which side prevails.  784 F.3d at 223-24.  Without the American Rule's thumb on the scale, the court felt free to interpret "all expenses" to include the expense of attorneys.

The opposing results in these two circuits in interpreting twin statutes would give the Supreme Court a valid reason to take up the issue and finally determine whether, in this one, outlier area of law, Congress actually meant to include "attorneys fees" when it used only the term "expenses."