Page v. DNC:  The Curious Case of the Stateless Citizen 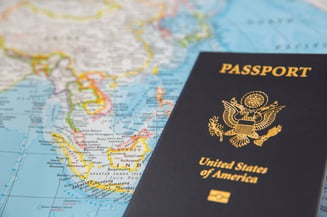 The analysis in a recent decision, Page v. Democratic National Committee, 2 F.4th 630 (7th Cir. 2021), of an oddity of federal jurisdiction—the "stateless" U.S. citizen—not only provides a good refresher course on how federal jurisdiction statutes are interpreted but also raises practical considerations for litigants to ponder in a case where there is a potential "stateless" party.

In a stateless party case, several well-established principles of federal jurisdiction combine to create a startling result, like an explosive device made from seemingly innocuous household ingredients.  The first well-established principle is that, if the plaintiff's complaint contains no claim under federal law, meaning that the sole basis for federal jurisdiction is diversity of citizenship under 28 U.S.C. Section 1332(a), then there must be "complete" diversity of citizenship among the parties.  The text of Section 1332 merely states that the suit must be between "citizens of different States" (28 U.S.C. Section 1332(a)(1)).  However, Section 1332 and its predecessors have long been interpreted (since Strawbridge v. Curtiss, 7 U.S. (3 Cranch) 267 (1806)) to require *complete* diversity, meaning that every plaintiff must be of diverse citizenship from every defendant. In other words, if two parties that are on opposite sides of the "v." in the case caption are not citizens of different states, then diversity is lacking, regardless of the citizenship of any other parties.  Page, 2 Fed. 4th at 636.

The third key principle is that the state of citizenship of an individual for jurisdictional purposes is based on domicile.  A person's place of domicile, which is not necessarily his or her residence, is a mixed question of law and fact, involving evidence of the person's intent.  Persinger v. Extendicare Health Servs., 539 F. Supp. 2d 995, 997 (S.D. Ohio 2008). While "[m]ere absence from a fixed home, however long or continued, cannot in and of itself effect a change in domicile" (id. at 998), once a person moves to a new location *and* intends to stay there indefinitely, then that is their place of domicile, regardless of whether they have a vague intention (what the cases call a "floating intention") to return to their previous state of residence.  Rayburn v. Anderson, 2021 U.S. Dist. LEXIS 1092, at *8-9 (M.D. Tenn. Jan. 5, 2021).

The fourth key principle, which follows directly from the third, is that a U.S. citizen domiciled abroad is considered a citizen of *no* state under the jurisdictional statutes.  A person who moves from Ohio to London, for instance, intending to stay in the U.K. indefinitely, is no longer "domiciled" in Ohio, or any other U.S. state.  That person is a "stateless" U.S. citizen. Page, 2 F.4th at 635.

In Page, application of these principles resulted in dismissal for lack of diversity jurisdiction.  The plaintiff filed suit in federal court against the Democratic National Committee, the law firm of Perkins, Coie LLP, and others.  Only state law claims were alleged, so Page, a resident of Oklahoma, pled diversity jurisdiction.  The district court dismissed the case on personal jurisdiction grounds.  On appeal, the Seventh Circuit affirmed, but did so on the alternative ground of a lack of complete diversity because it was undisputed that Defendant Perkins Coie had three partners who were U.S. citizens domiciled in China.  Page, 2 F.4th at 636-37.  As an LLP, Perkins Coie's citizenship included that of all its partners, which necessarily included its stateless partners living in China.  Thus, there was a stateless party, Perkins Coie, on one side of the case.  The court, relying on other circuits' previous construction of the wording of the Section 1332, which, like Article III, refers to "citizens of different states" (emphasis added), ruled that having no state of citizenship is not the same as having a different state of citizenship. Id. at 637-38 (citing cases from the First, Second, Third, and Fifth Circuits)).  The stateless citizen is "non-diverse." Id. at 638.  Thus, a suit between a party who is a citizen of Oklahoma and a party, Perkins Coie, that is a citizen of no state is lacking diversity.  Athough Section 1332 also authorizes a suit between a citizen of a state and "citizens or subjects of a foreign state" (Section 1332(a)(2)), that provision did not apply to Perkins Coie's overseas partners, because a U.S. citizen does not become a citizen of a foreign country merely by residing abroad. Page, 2 F.4th at 634.  In short, no provision of Section 1332 permitted jurisdiction.

Beyond being an example an interesting sub-issue in federal practice, Page raises a couple of practical considerations for litigants.  First, it suggests a potential risk for a plaintiff who is suing an unincorporated association of yet-to-be-determined ownership As Page noted, "[i]t is often no easy task for a plaintiff to discern the domicile . . . of each partner or member" (2 F.4th at 635), due to the size of some organizations (id.), as well as the lack of publicly-available resources on partners and members.  Since subject-matter jurisdiction may be raised at any time, even on appeal, or raised sua sponte by the court, counsel for a plaintiff who is uncertain about whether a stateless partner is lurking on the other side might never reach a point where he or she can be comfortable that diversity jurisdiction exists.  That lack of certainty will then be a factor in deciding whether to sue in state or federal court.

Second, a number of the stateless citizen cases, like Page, seem to involve multi-national law firms as parties.  If an unincorporated association known to have an international presence—like a multi-national law firm—seeks to invoke federal jurisdiction, either as a plaintiff or as a defendant filing a notice of removal in federal court, Page suggests that it may be prudent for counsel to aver affirmatively (assuming it is factually correct) that none of the organization's partners or members are stateless U.S. citizens.  The reason is that it is possible after Page that a federal court could deem a complaint or notice of removal filed on behalf of a "Big Law" firm or other multi-national unincorporated entity to be deficient for not affirmatively dispelling the possibility that there is a stateless U.S. citizen who is an owner of the firm.

The court in Page noted that the language of Section 1332 as interpreted by the Supreme Court required the result it reached and, to the extent the result seems anomalous or unsatisfactory, the remedy lies with Congress, not the courts.  Id. at 639.  Congress, for instance, could amend the statute so that the stateless partner is a "nullity" as to the partnership's citizenship (Page, 2 F.4th at 649), or it could amend Section 1332 to make an exception to complete diversity in this particular situation, as it has already done for class actions (Section 1332(d)(2)).  Until such an amendment occurs, however, the "stateless" citizen will remain a mysterious and disruptive figure in federal jurisprudence.