"The most powerful element in advertising is truth." 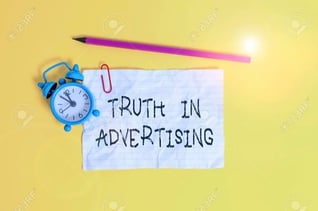 The federal Lanham Act, enacted in 1946, is the primary federal trademark statute in the United States, but the act also prohibits false advertising.  Generally, the false advertising provision of the Lanham Act prohibits misrepresentations about the nature, characteristics, qualities, or geographic origin of goods, services, or commercial activities.  While this may seem straightforward, there are some caveats and nuances to stating a false advertising claim under the Lanham Act.

For example, the Act provides a cause of action only against false or misleading statements made in commercial advertising or promotion.  Courts generally use a four-step analysis to determine if this requirement is met.  The statement in question must be:

(2) by a defendant who is in commercial competition with the plaintiff;

(3) for the purpose of influencing consumers to buy the defendant's goods or services; and

(4) the representations must be disseminated sufficiently to the relevant purchasing public to constitute 'advertising' or 'promotion' within that industry.

As the second element highlights, to successfully state a false advertising claim, the plaintiff must be in commercial competition with the defendant, and therefore, false advertising claims under the Lanham Act are not available to consumers.  Furthermore, claims regarding "puffery" are not actionable.  Puffery can be described as a general claim of superiority that is so vague as to merely be an opinion or an exaggerated bluster upon which no reasonable consumer would rely ("Gilette: the best a man can get," for example).

(1) the defendant made false or misleading statements of fact about the plaintiff's or defendant's goods, service, or commercial activities;

(2) the advertisements actually deceived, or have the tendency to deceive, a substantial segment of their audience;

(3) the deception is likely to influence the purchasing decision;

(4) the statement was made in commerce; and

(5) the plaintiff has been or is likely to be injured.

While the elements are straightforward, there are some nuances worth noting.  Even though the first element allows for a cause of action for merely misleading statements, if this is the case, then under the second element the plaintiff must introduce extrinsic evidence to establish consumers are likely to be deceived.  For example, Pizza Hut sued Papa John’s for a slogan they used in their advertising, “Better Ingredients.  Better Pizza.”  Pizza Hut, Inc. v. Papa John’s Int’l, 227 F.3d 489, 491 (5th Cir. 2000).  While Pizza Hut ultimately proved this statement was misleading, their suit failed on appeal because they could not prove the misleading statement was material to consumers’ decisions to purchase food from Papa John’s.  Id. at 504.  However, if the statement in question is false, then consumer deception is presumed.  Moreover, under the fifth element, injury can come from either (1) direct diversion of sales from the plaintiff to the defendant or (2) by lessening the plaintiff's goodwill with the buying public.  Presumably, the first injury would occur when the defendant makes false statements about the superiority of their products while the second injury would occur when the defendant makes false statements about why the plaintiff's products are inferior.

However, the Lanham Act is not the only law businesses need to be aware of.  There are also state laws regarding false advertising and business disparagement.  Ohio's Deceptive Trade Practices laws are comprehensive and cover thirteen different causes of action.  The causes of action that are most analogous to the Lanham Act are R.C. 4165.02(A)(7) through (A)(10).  Sections (A)(7) through (A)(9) prevent a person or business from representing their goods or services to be something they are not, this can include but is not limited to making false representations about a good's benefits, qualities, condition, or characteristics.  Whereas (A)(10) prevents a person or business from, "[d]isparag[ing] the goods, services, or business of another by false representation of fact."  Ohio courts have not substantially expanded on what is needed to successfully make a business disparagement claim, only stating that there must be (1) a false representation of fact made by the defendant (2) acting in the course of their business or vocation, which (3) harmed the pecuniary interests of the plaintiff's business.

If a business wants to effectively grow their revenue, they will almost certainly have to advertise at one point or another.  To advertise effectively and without risk of a lawsuit, businesses need to understand the ins and outs of both false advertising claims under the Lanham Act and business disparagement claims under state law.