Try Not to Think About a Polar Bear:  The Palin v. NYT Verdict 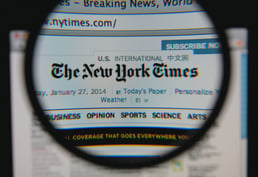 On Feb. 15, 2022, the defamation case brought by former Alaska Governor Sarah Palin against the New York Times concluded with a jury verdict for the defense; however, an unusual procedure adopted by the trial judge just before the verdict was reached has created an intriguing issue if the case is appealed.

The case arose out of a recycled false accusation.  In 2011, after a deranged man shot Arizona Congresswoman Gabby Giffords, various news outlets claimed that he was inspired by a graphic on the website of Sarah Palin's Political Action Committee that was used to illustrate that Giffords' and other Congresspersons' seats were vulnerable in the 2012 election.  Six years later, in 2017, after a leftwing activist attempted to assassinate Republican Congresspersons on a baseball field in Virginia (and succeeded in wounding Congressman Steve Scalise, as well as three other people), a New York Times editor clumsily inserted into an editorial in the print edition, which was ostensibly about the 2017 attack and titled "America's Lethal Politics," a repeat of the false accusation against Palin: "Was this attack [the baseball field attack] evidence of how vicious American politics has become? Probably.  In 2011, when [a gunman] opened fire in a supermarket parking lot, grievously wounding Representative Gabby Giffords and killing six people, including a 9-year-old-girl, the link to political incitement was clear.  Before the shooting, Sarah Palin’s political action committee circulated a map of targeted electoral districts that put Ms. Giffords and 19 other Democrats under stylized cross hairs."

Palin sued the New York Times for defamation, despite the Times having published a correction (a day after running the editorial, the Times said it had "incorrectly stated that a link existed between political rhetoric and the 2011 shooting" and that the map was "incorrectly described") and despite the long odds against winning.  The Times has not lost a defamation case in over 50 years, as an article published at the beginning of the Palin trial noted. Seth Stevenson, "Ticktock of a Journalist's Nightmare," Slate (Feb. 3, 2022).  The reason for that unblemished court record probably owes less to unfailing accuracy and more to the fact that it is nearly impossible for a famous person to prove defamation under the standard of New York Times Co. v. Sullivan, 376 U.S. 254 (1964).  Sullivan held that the First Amendment requires proof of actual malice for defamation where the plaintiff is a "public official." The Court later extended the Sullivan standard from "public officials" to the more nebulous category of "public figure[s]."  Curtis Publishing Co. v. Butts, 388 U.S. 130, 155 (1967).  The Court has further held that actual malice requires serious doubts that the statement is true, and that failure to investigate is not actual malice. St. Amant v. Thompson, 390 U.S. 727, 731, 733 (1968).

Some legal scholars, and two Supreme Court justices, have suggested that the pendulum on defamation law has swung too far in defendants' favor and that some reform is needed.  See Glenn Harlan Reynolds, Rethinking Libel for the Twenty-First Century, 87 Tenn. L. Rev. 465 (2020); David A. Logan, Rescuing Our Democracy By Rethinking New York Times Co. v. Sullivan, 81 Ohio St. L.J. 759, 778, 779 (2020) (noting that Sullivan perversely disincentivizes fact-checking and investigation – "under an 'actual malice' regime, ignorance is bliss"); Berisha v. Lawson, 141 S. Ct. 2424, 2428 (2021) (Gorsuch J. dissenting from denial of certiorari) ("over time the actual malice standard has evolved from a high bar to recovery into an effective immunity to liability"); McKee v. Cosby, 139 S. Ct. 675, 676 (2019) (Thomas, J., concurring in denial of certiorari) ("New York Times and the Court's decisions extending it were policy-driven decisions masquerading as constitutional law.").

Nevertheless, Sullivan remains good law, and Judge Rakoff instructed the jury in Palin in accordance with the Sullivan standard: "[I]t is not enough just to show that Mr. Bennet [a Times editor named as a co-Defendant in Palin] did not know, one way or the other, whether the challenged statement you are considering was true or false.  Nor is it enough to prove that he was merely negligent regarding that statement's truth or falsity. . . . Even irresponsible reporting . . . does not, on its own, establish actual malice, unless the plaintiff has proved that there was a high probability that Mr. Bennet actually doubted the truth of the challenged statement you are considering and, nevertheless, consciously chose to disregard the high probability that the statement was false." Jury Instruction No. 13 (excerpt).  In the classic Western film directed by John Ford, "The Man Who Shot Liberty Valance," a newspaper reporter learns the truth about the shooting of the outlaw Liberty Valance many years after it has passed into myth, but he refuses to do a story exposing the truth, uttering the famous line, "when the legend becomes fact, print the legend."  Judge Rakoff, following Sullivan, essentially told the jury that, for Palin to prevail, there had to be proof that the New York Times editor had directed the paper to "print the legend."

While, under those instructions, the jury was likely to rule in the Times' favor, the Times' defense team still prudently moved for judgment as a matter of law pursuant to Fed. R. Civ. P. 50(a) after the close of evidence.  A Rule 50(a) motion may be granted if "the court finds that a reasonable jury would not have a legally sufficient evidentiary basis to find for [a] party" on that party's claim.  On Feb. 14, 2022, Judge Rakoff told the parties that he would issue a decision on the Rule 50 motion that day, which he did, ruling in the Times' favor.

The court then significantly deviated from normal practice: after announcing that he was granting the Rule 50 motion, Judge Rakoff stated that he was also letting the jury continue to deliberate until it reached a verdict, regardless of the fact that he had already decided that judgment would be granted against Palin.

So why did the judge not dismiss the jury, since their verdict would not matter?  The judge's explanation, according to press reports (no official transcript of his remarks has been made available yet), was that "he had allowed the jury to return its own verdict with an eye toward avoiding a retrial if Palin overturned his ruling on appeal."  Frank G. Runyeon, "Jurors Knew Palin's NYT Libel Case Was Axed Before Verdict," Law 360 (Feb. 16, 2020).

The jurors in Palin were not sequestered but rather sent home every night with instructions to avoid news about the trial, which makes Judge Rakoff's decision to publicly announce that the Times had won, yet let the jury continue to deliberate, a bit troubling.  Since this is 2022, not 1962, was there not a non-negligible risk that the jurors would somehow find out about the decision to rule for Defendants?  As it happened, they did find out: after the jury ruled in favor of the Times on Feb. 15, 2022, the jurors told Judge Rakoff's clerk that "they had involuntarily received 'push notifications' on their smartphones that contained the bottom-line of the ruling." Feb. 16, 2022 Entry, p. 1.

In a Feb. 16 Entry, Judge Rakoff stated that the jurors "repeatedly assured the Court’s law clerk that these notifications had not affected them in any way or played any role whatever in their deliberations," but I do not see how an appellate court could give those assurances any credence.  "It's ridiculous to say the jury was not influenced, how could they not be?" as Professor William Jacobson of Cornell Law School commented acerbically on his blog "Legal Insurrection."  It is indeed hard to imagine any waverers on the jury being able to argue against a defense verdict after the judge's views became known.  Further, one could not expect the jury to be able to completely ignore the judge's ruling, knowledge of which put them in a position much like the person in Dostoevsky's classic "polar bear" problem ("Try to pose for yourself this task: not to think of a polar bear, and you will see that the cursed thing will come to mind every minute.").  Also, as Professor Jacobson points out, "why did the judge instruct them not to listen to or watch news coverage of the case unless news coverage in itself would be a taint?" Judge Rakoff's unorthodox approach essentially negated the utility of the jury verdict.

In his Feb. 16 Entry (p. 2), Judge Rakoff noted that neither side objected to this procedure (that is, publicly announcing he was entering judgment for the defense but nonetheless letting the jury reach a verdict), implying that Palin's counsel waived any argument that the procedure was reversible error.  However, error or not, I do not believe the Second Court of Appeals can affirm the jury verdict under the circumstances.  Rather, the Second Circuit should a) consider the verdict as if the judge had told the jury directly, in open court, how he intended to rule on the Rule 50 motion, and deem the verdict tainted by that knowledge, and then b) simply determine whether the Rule 50 motion was correctly decided.  Why not address the jury verdict? Because the Rule 50(a) decision can be upheld only if "de novo" review by the appellate court determines that no reasonable jury could have found for Palin (Stevens v. Rite Aid Corp., 851 F.3d 224, 228 (2d Cir. 2017)).  In contrast, if, despite the jury verdict likely being influenced by (if not dictated by) the Rule 50 ruling, the appellate court went ahead and reviewed the verdict, it would be reversed only if the court determined that no reasonable jury could find against Palin (Doctor's Assocs., Inc. v. Weible, 92 F.3d 108, 112 (2d Cir. 1996) (for judgment to be entered notwithstanding the jury verdict, "the evidence must be 'so overwhelming that reasonable and fair-minded persons could only have reached the opposite result'")).  The defense should not benefit from the Rule 50(a) determination being "jury-washed," so to speak, into a more lenient standard of review on appeal.

Of course, the Second Circuit may never have to decide whether the judge's announcement negated the verdict, since the issue will be mooted if the Second Circuit affirms the grant of the Rule 50(a) motion, which is probable, given the stringent Sullivan test for actual malice.  Regardless of what happens next in Palin v. NYT, though, the controversy over the judge's novel approach to ruling on the Rule 50 motion should make other courts cautious about adopting it.