COVID-19: How to Determine whether the Pandemic is a Force Majeure Event that Excuses Contractual Performance 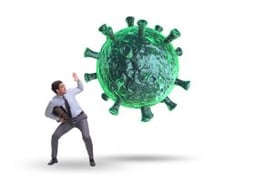 The outbreak of COVID-19 has caused an unprecedented disruption in American life that is now expected to continue through at least April.  While most Americans work from home and adjust to the disruption of their day-to-day lives, American businesses face price fluctuations, shortages of raw materials, logistics issues, and other significant interruptions to their business operations that the sudden halt in global industry activity caused.  Businesses in all industry sectors must prepare for the contingency in which they cannot fulfill an existing contractual obligation.  This preparation starts with a review of the company’s contracts for language that may excuse performance in the event of exceptional occurrences like the current pandemic.

When reviewing a force majeure provision to determine its applicability to the current pandemic, keep a few things in mind.  First, the non-performing party bears the burden of proving that the event occurred beyond the party's control and without its fault or negligence.  Id.  Second, evaluate whether the force majeure provision has a notice requirement and, if so, comply immediately.

Third, review what events, if any, are specifically listed (either as being included, or excluded) in the force majeure provision.  Force majeure provisions usually enumerate specific events that excuse performance such as "Acts of God," war, insurrection, strikes, terrorism, natural disasters like earthquakes and floods, and sometimes have a broadly written "catch-all" provision.  If the force majeure provision does not specifically enumerate an epidemic or pandemic, examine the provision for an event that is one of the effects of COVID-19 (e.g., material shortages, labor shortages, acts of a government or "government intervention," etc.).  Events that render a contract unprofitable or economically infeasible, however, generally do not constitute a force majeure.  See In re Millers Cove Energy Co., 62 F.3d 155, 159 (6th Cir.1995) (holding that "lack of economic feasibility" does not exclude contract performance under contract's force majeure clause absent specific language to that effect); Langham Hill Petroleum, Inc. v. S. Fuels Co., 813 F.2d 1327, 1330 (4th Cir.1987) (rejecting application of force majeure clause where foreign government acted to cause a collapse in world oil prices, making the contract unprofitable for one party).

Fourth, due to jurisdictional differences, identify whether the contract contains a choice of law provision.  While there is a limited overall body of case law that interprets force majeure provisions, the existing law varies between jurisdictions in how broadly or narrowly courts interpret force majeure clauses to determine whether an alleged event is within the scope of the clause.  Courts focus on the type of events listed  in the force majeure clause e.g., "Acts of God," war, insurrection, strikes and any "catch-all" phrasing to determine whether an event falls within the clause.  New York and Michigan courts construe force majeure clauses the most narrowly and hold that an alleged supervening event excuses performance only if the force majeure clause specifically identified that alleged event as excusing performance.  Beardslee v. Inflection Energy, LLC, 904 F.Supp.2d 213, 220 (N.D.N.Y.2012) (applying New York law); Kyocera Corp. v. Hemlock Semiconductor, LLC, 313 Mich.App. 437, 446-447, 886 N.W.2d 445 (2015) (noting that a force majeure clause "will generally only excuse a party's nonperformance if the event that caused the party's nonperformance is specifically identified.") (internal citations omitted).

Texas and California courts are less restrictive, and will find an alleged event that is not specifically listed excuses performance (i.e., the event falls under "catch-all" language) where the party shows the alleged intervening event was unforeseeable.  Texas and California courts read this requirement into a force majeure's "catch-all" language even where the force majeure clause is silent on the issue of foreseeability.  Free Range Content, Inc. v. Google Inc., N.D.Cal. No. 14-cv-02329-BLF, 2016 U.S. Dist. LEXIS 64365, at *16 (May 13, 2016) (applying California law); TEC Olmos, LLC v. Conocophillips Co., 555 S.W.3d 176, 182-183 (Tex.App.2018).  One Texas appeals court recently explained this reasoning by noting that the purpose of a contract is to assign risk and the promisor is presumed – absent contrary language – to assume the risk of an event that is foreseeable at the time of contracting.  Therefore, the court explained, where a party requests a court to excuse performance due to an event that is not specifically listed, it is appropriate to require that event be unforeseeable because the risk of a foreseeable event, but not an unforeseeable event, is assumed by the promisor.  TEC Olmos, LLC., 555 S.W.3d 176, at 184-85.  Similarly, some courts will apply the common law principles of impossibility and impracticability, which require a party show that the intervening event was unforeseeable, to boilerplate or ambiguous force majeure clauses. See Commonwealth Edison Co. v. Allied-General Nuclear Servs., 731 F.Supp. 850, 855 (N.D.Ill.1990)(finding that a boilerplate force majeure clause should be interpreted in light of common law principles of impossibility and impracticability, which require that the intervening event be unforeseeable, but a specifically-negotiated force majeure clause should be interpreted using contract principals).  Meanwhile, other jurisdictions have refused to read a requirement of foreseeability or the common-law requirements of impossibility into a force majeure clause that does not expressly contain such requirements.  See Perlman v. Pioneer Partnership, 918 F.2d 1244, 1248 (5th Cir.1990) (applying Wyoming law); Sabine Corp. v. ONG W., Inc., 725 F.Supp. 1157, 1170 (W.D.Okla.1989) (applying Oklahoma law).

Indeed, the choice of law provision may be outcome determinative of a force majeure defense that is premised on an intervening event that is not specifically identified in the contract.  In Ohio, like most jurisdictions, there are few cases where courts interpret and apply force majeure provisions, much less address the nuances discussed above.  See Haverhill Glen, LLC., 2016-Ohio-8030 at ¶ 25 (noting that "[force majeure] is a relatively new concept in Ohio law.").  Reliance on a force majeure defense in a jurisdiction with little case law still involves risk, especially where the event complained of is not specifically identified in the contract.  Where courts have little authority to rely on from their jurisdiction, they may fall back on common-law principles of impossibility and focus on how the contracting parties assigned risk.  See generally, United States v. Winstar Corp., 518 U.S. 839, 905-07, 116 S. Ct. 2432, 2469-70 (1996)("if [the risk] was foreseeable there should have been provision for it in the contract, and the absence of such a provision gives rise to the inference that the risk was assumed.") (internal citations omitted).  The bottom line is that the strongest force majeure defense in any jurisdiction is premised on an intervening event that is specifically identified in the force majeure clause.

Finally, if the contract does not have a force majeure clause, or the clause does not specifically identify a pandemic or an event that is one of the effects of COVID-19, examine whether the defense of impossibility or impracticability applies.   In Ohio, courts take a strict approach to the defense of impossibility – a party must show the event was unforeseeable and that the event rendered performance objectively impossible.  Wittrock v. Paragon Paper Co., 1st Dist. Hamilton No. C-840883, 1985 Ohio App. LEXIS 9676, at *8 (Dec. 18, 1985); J.I.L. One LLC v. Kemper, 1st Dist. Hamilton No. C-130555, 2014-Ohio-4932 (noting that Ohio adheres to the stricter standard of impossibility rather than the modern standard of impracticability).  For contracts for the sale of goods, though, Ohio has adopted the Uniform Commercial Code, which does not require objective impossibility.  Ohio Rev. Code § 1302.73.  Case law is much more developed in all jurisdictions on the defenses of impracticability and impossibility, and many courts have addressed these defenses in the context of government orders.  Still, both defenses of impracticability and impossibility require proof that an unforeseen event altered "a basic assumption on which the contract was made", and fluctuation in markets and defenses of "financial practicability" are usually rejected by courts.  See Hemlock Semiconductor Operations, LLC v. SolarWorld Industries Sachsen GmbH, 867 F.3d 692, 704 (6th Cir.2017).

When reviewing a contract's force majeure clause it is most important to carefully examine the events specifically identified, identify any choice of law provision, and research the controlling jurisdiction's existing case law on force majeure provisions.  If appropriate, remember to comply with any notice requirements set forth in the force majeure clause.