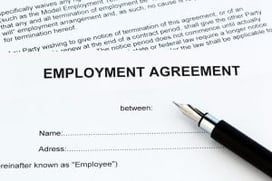 Protection of a company's competitive advantage is vital.  Therefore, it is necessary that employers understand the options available when evaluating how best to protect their company.  One common practice is the non-compete agreement.

What constitutes a "reasonable" non-compete agreement?

In Ohio, a non-compete agreement is reasonable if the agreement:  (1) is no greater than is required for the employer's protection of a legitimate interest; (2) does not impose undue hardship on the employee, and (3) is not injurious to the public.  American Bldg. Servs. v. Cohen, 78 Ohio App. 3d 29, 33 (Ohio App. 12th Dist. 1992) (relying on Raimonde v. Van Vlerah).

The Ohio Supreme Court set forth several factors for examining the reasonableness of a non-compete agreement.  Raimonde v. Van Vlerah, 42 Ohio St. 2d 21 (1975).  These factors include the length of time and geographic scope of the restrictive covenant, whether the employee is the sole contact with the customer, whether the skills seeking to be restrained by the agreement were developed during employment, and whether an employee came into possession of confidential information or trade secrets during the employment.  Id. at 25.

The employer bears the burden of establishing the reasonableness of the agreement.  Therefore, be practical when evaluating the scope of restraint to impose on an employee.  Even if the employee agrees to an overly broad and aggressive non-compete agreement, she may challenge the validity of the agreement later, and a court may find the agreement unenforceable in its entirety.

Trial courts in Ohio have the option to modify an overbroad covenant not to compete, but it is within the court's discretion whether to do so.  Rather than risk the court striking down the agreement altogether, or re-writing it so that its worth is severely diminished, put the time in on the front end to consider what exactly needs protection and what is the least restrictive means of affording such protection.

What other terms should be included in a non-compete agreement?

If, however, the law and forum selected has no substantial relationship to the transaction at issue, then the provisions may not be enforced by the court.  For example, California prohibits most non-compete agreements.  Despite an Ohio choice of law provision, if the relevant acts took place in California and/or substantially affect business in California, then a court is likely to find California law applies, not Ohio law, because California has a significant interest in the outcome of the case.  A recent example can be found at Lifestyle Improvement Centers, LLC v. East Bay Health, LLC, Case No. 2:13-cv-735 (S.D. Ohio Oct. 7, 2013) (finding that, despite an Ohio choice of law provision, California law applied and the non-compete provision was unenforceable under California law).  Click here for a great analysis of Lifestyle Improvement.[1]

Confidentiality.  Depending on the nature of the business or employment relationship, the parties may seek to keep the terms of the non-compete agreement confidential.  While these types of provisions are fairly straightforward, be carful to allow exceptions necessary to effectuate any term or provision of the agreement, to disclose the agreement to a party's accountant or lawyer for use in connection with providing professional services, and as required by law.

Non-Disparagement.  A non-disparagement provision prohibits the parties from bad-mouthing one another.  Non-disparagement provisions seem to go hand-in-hand with a non-compete agreement.  After all, the overall purpose of the agreement is to protect a company's competitive advantage.  What good is it if the employee refrains from working for a competitor if she is bad-mouthing the company all over town?  Of course, other laws are available to protect a company's reputation and business interests (e.g., defamation, tortious interference, etc.); however, a non-disparagement clause is a simple way to remind the employee (and employer) to maintain professionalism despite the end of the employment relationship and ensure protection of the company's reputation and competitive advantage.

Applicability to Successor and Assigns.  Despite the Ohio Supreme Court's decision in Acordia of Ohio, L.L.C. v. Fishel, 133 Ohio St.3d 356 (Oct. 11, 2012) ("Acordia II") (finding that "employee noncompete agreements transfer to the surviving company after a merger has been completed pursuant to R.C. 1701.82(A)(3)"), it is still prudent to include specific language in a non-compete agreement regarding its applicability to successors-in-interest.  Additionally, successor businesses should evaluate their non-compete agreements to ensure that they are fully protected.  Just because the non-compete transfers does not mean that the agreement is enforceable.  As reiterated in Acordia II, "employees still may challenge the continued validity of the noncompete agreements based on whether the agreements are reasonable and whether the numerous mergers in this case created additional obligations or duties so that the agreements should not be enforced on their original terms."  If your business is the successor-in-interest, one option is to require the employees to sign a new non-compete agreement as a condition of their continued at-will employment.

When should I have my employees sign a non-compete agreement?

If there is any concern regarding competition, then the best practice is to have employees sign a non-compete agreement at the outset of the relationship – either as a stand alone agreement or as part of the employment contract.  The agreement may be revised, supplemented and amended as the employee changes roles, is promoted, etc.  But, be careful.  An oral extension of a noncompetition agreement may be barred under the statute of frauds if it cannot be performed in a year.  Make sure any extension or revision of the agreement is in writing and signed by both parties.

Non-compete agreements are a useful tool for employers to protect their competitive interests.  It is important, though, that these types of agreements are used sensibly.  Covenants not to compete are more likely to be enforced if they are narrowly tailored to protect only a company's legitimate, identifiable business interests – not to control a particular industry or prevent former employees from making a living.  As this area of the law continues to progress, in Ohio and elsewhere, it is always smart to consult with a lawyer before entering into any restrictive covenant.