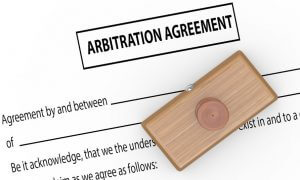 Kelly Services, Inc. is an outsourcing and consulting company that includes among its services, "'virtual'" call center support.  Gaffers, No. 16-2210, slip op. at 2.  The virtual call center allowed employees, like Johnathan Gaffers, to work from home.  Id.  Gaffers brought suit on behalf of himself and his fellow employees (over 1,600 at the time of the Sixth Circuit's decision) for back pay and liquidated damages under the collective-action provision of the FLSA.  Id.  Gaffers claim is that Kelly Services did not compensate employees for time spent logging into and out of the network, and fixing technical problems.  Id.

The Sixth Circuit relied on Epic to dismiss both Gaffers NLRA and FLSA claims.  The Court pointed to the holding in Epic and reiterated that the only way a federal statute could displace the FAA was through "'clear and manifest' congressional intent."  Id. at 3 (quoting Epic Sys. Corp., 138 S. Ct. at 1624).  The Court further held that Congress must expressly state that arbitration agreements are not an obstacle to collective action, rather than merely providing for a right to engage in collective action.  Id. (citing Epic Sys. Corp., at 1626-27).  The Court held that the FLSA provision in question merely provided Gaffers the right to sue collectively on behalf of his fellow employees, but did not require employees to vindicate their rights through collective action.  Id.

Gaffers alternatively argued that even if FLSA does not displace the FAA, the savings clause of the FAA allows the Court to refuse to enforce the arbitration agreements.  Id. at 4.  The savings clause covers defenses that would apply to any contract, but does not permit defenses that simply attack agreements that provide for arbitration.  Id. at 5.  Therefore, "defenses that (1) apply only to arbitration agreements, or (2) interfere with the 'fundamental attributes of arbitration' are both insufficient."  Id.  (quoting Epic Sys. Corp., 138 S. Ct. at 1622).  The Court held that the Gaffers' argument fell squarely in the latter form of defenses and was insufficient under Epic.  Id.