Combatting the Risks of Departing Employees Part One:  Ohio's Employment-at-Will Doctrine and its Exceptions 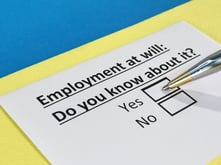 Over the next few months, Faruki PLL will feature a series of articles discussing some of the risks relating to employee departures and highlighting employers' options regarding minimizing those risks.  In this first part, we introduce the doctrine of "at-will employment" and identify common exceptions to that doctrine.

Ohio recognizes five general situations that can interfere with the employer's right to terminate an employee at will:

An implied employment contract is an express contract (discussed above) that is not in writing.  Instead, a court can look at the facts and circumstances surrounding the employment relationship to determine whether the elements to a contract are satisfied.  Employees typically attempt to prove an implied contract exists based on statements in the employee handbook, statements from supervisors (e.g., promises of job security in exchange for good performance), or written assurances that company policy is to terminate an employee only for cause.  However, it is difficult and uncommon for an employee to successfully establish an implied employment contract.

Ohio courts do not typically allow employees to maintain promissory estoppel claims based on promises of job security, discussions of future career development, or praise with respect to job performance.

State and federal law prohibit an employer from terminating an employee based on certain legally protected characteristics and activities. For example, employers cannot terminate employees on the basis of, among other things, gender, race, religion, sexual orientation, disability, or age.  Employers also cannot terminate an employee for engaging in certain activities like filing a workers compensation claim, in retaliation for "whistleblowing," or exercising rights regarding minimum wage or overtime pay.

Courts have found that terminating an employee violates public policy if the employer's termination decision is based on the employee providing truthful testimony in an official proceeding, serving on a jury, speaking to an attorney, or asking the employer to assign part of his or her wages to pay child support.

Despite the exceptions discussed above, the general rule is that an employer can terminate an employee at any time for any reason.  We will explore the exceptions to employment at will, and related topics, in future posts in this space.  Stay tuned.