Constitutional Standing and Statutory Injury:  The Sixth Circuit Weighs in on the "Concrete Injury" Requirement under Spokeo 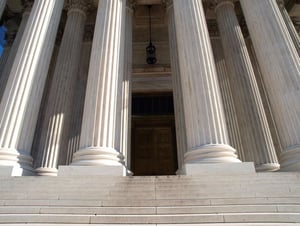 The "well-worn yet enduring standards" of Article III standing – constitutionally required to bring a case in federal court -- are (1) the plaintiff suffered an injury in fact, (2) caused by the defendant, and (3) that is redressable by a judicial decision.  In 2016, the Supreme Court of the United States decided Spokeo v. Robins, 136 S.Ct. 1540, 1547 (2016), in which it addressed the "injury in fact" element of standing, and it held that a plaintiff seeking redress for a statutory violation must show a "concrete injury" as opposed to a purely procedural or technical violation of the statute.  To have standing, a plaintiff cannot simply allege that the defendant violated the statute and that alone caused injury. Instead, the plaintiff must allege some injury that is "real, not abstract, actual, not theoretical, concrete, not amorphous."  Huff v. Telecheck Servs., 923 F.3d 458, 462 (6th Cir. 2019) (citing Spokeo, 136 S.Ct. at 1548).  Further, while an injury in fact can be tangible (e.g., economic loss or physical injury) or intangible (e.g. loss of free speech, increased risk of harm), that "does not mean that a plaintiff automatically satisfies the injury-in-fact requirement whenever a statute grants a person a statutory right and purports to authorize that person to sue to vindicate that right."  Spokeo at 1549.  Rather, lower courts are to look to congressional judgment and historical practice for guidance in making the assessment of whether the plaintiff's alleged intangible harm is a concrete injury in the context of a statutory violation.

As the Sixth Circuit Court of Appeals recognizes, "[a]fter Spokeo, we know there is no such thing as an 'anything-hurts-so-long-as-Congress-says-it-hurts theory of Article III injury.'" (citation omitted).  But really, what does "concrete injury" mean?

In May, 2021, the Sixth Circuit rendered two decisions addressing concrete injury in the context of an alleged statutory violation.  In Thomas v. TOMS King (Ohio), LLC, No. 20-3977, 2021 U.S. App. LEXIS 13884, *1 (6th Cir. May 11, 2021), the plaintiff (attempting to bring a class action) alleged the defendant (TOMS King owns Burger King restaurants) violated the Fair and Accurate Credit Transactions Act of 2003 ("FACTA") when it issued a receipt that contained the first six and last four digits of her credit card number, technically a violation of the statute.  The injuries plaintiff alleged were violation of the statute (what Congress sought to avoid), potential for increased risk of identity theft, and burden on the plaintiff to safeguard her receipt.  Analyzing the concrete injury requirement under Spokeo, the Sixth Circuit found that none of the alleged injuries were concrete to confer Article III standing.

First, the court held that plaintiff's argument that the mere violation of FACTA and the grant of a statutory right and remedy was sufficient was "without merit."  Id. at *8.  It reviewed congressional judgment along with other cases that had looked at the issue and found, like most other cases, that "not every violation of FACTA's truncation requirement creates a risk of identity theft."  Id. at *9 (citation omitted).  Indeed, "(1) the first six digits of a card number reveal nothing more than the card issuer, and (2) FACTA does not prohibit printing the identity of the card issuer on a receipt."  Id.  Thus, "there is no automatic concrete harm.  Id. At *10.

Second, with respect to the "increased-risk-of-injury" argument, the court agreed that while it is true that FACTA "reflects Congress's desire to reduce the risk of identity theft before, or regardless of whether, it ever occurs," that does not answer the question of whether that interest is "concrete."  Id. at *15.  In this particular case, the plaintiff "d[id] not aver [] how the printing of the six first digits and last four digits lead to the aforementioned evils, leaving it up to the court to infer a highly speculative change of future events."  Id. at *18-19 (internal quotations and citations omitted).

"To recap:  A violation of the statute does not automatically create a concrete injury of increased risk of real harm even if Congress designed it so.  And the factual allegations in this complaint do not establish an increased risk of identity theft either because they do not show how, even if plaintiff's receipt fell into the wrong hands, criminals would have a gateway to consumers' personal and financial data."  Id. at *19.

Third, and finally, the court found that the allegation of harm in terms of forcing her to safeguard her receipt also did not establish a concrete harm.  "A hypothetical future harm that is not certainly impending is not a concrete injury and so plaintiff's efforts to protect her identity cannot be either."  Id.  At *20 (internal quotations and citation omitted).

The Sixth Circuit next engaged in an analysis of "historical practice" to determine if any of the plaintiff's alleged injuries were "concrete," but it ultimately rejected the plaintiff's argument that a FACTA claim is analogous to the common law torts of breach of confidence and invasion of privacy.  The court agreed with the Third and Eleventh Circuits that have held there is no resemblance to these torts because there is no disclosure of confidential information to a third party and a consumer and retail store do not have a confidential relationship.  Id. at * 21-23.  For all of these reasons, the plaintiff had no standing because she had no concrete injury and her case was correctly dismissed.

Two weeks after Thomas, the Sixth Circuit decided Garland v. Orlans, P.C., No. 20-1527, 2021 U.S. App. LEXIS 16107, *1-2 (6th Cir. May 28, 2021), a case in which the plaintiff tried to bring a class action under the Fair Debt Collection Practices Act ("FDCPA") based on a letter the plaintiff received which was printed on law firm letterhead and stated that the plaintiff's mortgage had been referred to it for foreclosure and that "while the foreclosure process had begun, foreclosure prevention alternatives might still be available" if the plaintiff reached out to the lender. Plaintiff's injury was alleged to be confusion and increased anxiety.  Id. at *1-2 (internal quotations omitted).  The Court found that plaintiff had no standing because he did not have a concrete injury.

To begin, the Court explained that confusion and anxiety are "intangible harms" that must be analyzed under Spokeo's intangible-harm framework (looking at history and congressional intent).  Id. at *7.

"We can dispense with confusion easily under Spokeo.  Confusion does not have a close relationship to a harm that has traditionally been regarded as providing a basis for a lawsuit….[T]he state of confusion is not itself an injury.

The anxiety analysis is not as easy, but [plaintiff's] anxiety allegation also fails.  This is not the first time this Court has considered an attorney-letterhead allegation of anxiety.  In Buchholz, [Buchholz v. Meyer Njus Tanick PA, 946 F.3d 855, [865-67] (6th Cir. 2020)] this court held that a similar attorney-letterhead plaintiff lacked standing because 1) fear of future harm not certainly impending is not an injury in fact and 2) his injury was not traceable to the defendant's conduct.  In that case, the panel majority also questioned whether a bare allegation of anxiety could be a concrete injury-in-fact at all.  Though we did not answer that question in Buchholz, today we do."  Id. at *7-8 (citations omitted).

And, the Sixth Circuit held that anxiety alone is not a concrete injury.

Second, there is nothing in the FDCPA to suggest that the legislature intended to make anxiety cognizable.  Id. at *11-12.  Third, the plaintiff's "anxiety is too speculative to qualify as an injury in fact because it is merely a fear of a future harm that is not certainly impending."  Id. at *12 (citations omitted).

For both plaintiff's counsel and defense counsel, these new cases need to be in mind, when either preparing the lawsuit or defending it.  These new cases demonstrate that the Sixth Circuit understands the importance of and takes seriously its gate-keeping function, and that "Congress cannot erase Article III's standing requirement."  Indeed, as the Sixth Circuit reminds us in Thomas, 2021 U.S. LEXIS 13884 at *27:

"the bottom line in these cases… is that statutory-injury-for injury's sake does not satisfy Article III's injury in fact requirement.  By exercising our constitutional duty to make sure a plaintiff has standing, we ensure that Congress does not abuse its constitutional power to define and create by 'overriding [its] constitutional limits.'" (citation omitted)