Do Fireworks and Drones Mix? 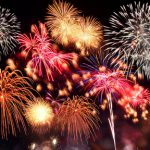 As millions of Americans gathered in parks, high school lots, and public spaces to watch grand fireworks displays, some enthusiasts attempted to capture these pyrotechnic marvels through unmanned aerial vehicles (“drones”).  Over the weekend, Faruki attorney Zach Heck spoke with Consumer Reports about the legality of recording fireworks with drones, and explained why it is ultimately a bad idea. Click for complete interview.