Look In the Sky! It's a Bird! It's a Plane! It's State UAV Laws & Regulations! 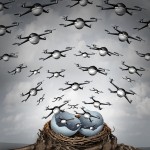 Unmanned aerial vehicles ("UAVs" or "drones") are increasingly flooding our skies. Unlike the model airplanes or remote-controlled toys that many of us grew up playing with, UAVs are becoming increasingly popular for many different applications:  law enforcement, land surveillance, wildlife tracking, farming, search and rescue operations, disaster response, border patrol, photography, journalism, and entertainment. Accordingly, UAV's have become the subject of many federal regulations and legal challenges.

I think it is worth taking a moment to acknowledge the impact proper terminology has had on the perception of UAVs in the United States and around the world. Indeed, this use of terminology has colored public opinion and, as a result, influenced the national debate about UAVs.  Specifically, it is important to distinguish “drones” as a subclass of UAVs.  A drone is but one kind of UAV. Specifically, the word “drone” is most commonly used to describe a weaponized UAV, such as those used the military.  (Think “Predator Drone.”)  This type is different than the majority of UAVs that are in use today for seemingly endless purposes and benefits, a few of which I touched above.  Indeed, the majority of UAVs present no threat to public safety or even privacy, yet the term “drone” presents a negative connotation, at the least.  To say this has complicated the legislative process in view of public concern is an understatement.

As I draft this post, I can recall no fewer than six instances of looking outside my office window and seeing a UAV darting behind a building, or hovering across the Great Miami River. A casual glance at the electronics department of any given store will reveal a wide variety of UAVs available at competitive prices.  Specialty shops are popping up for all of your UAV needs. With that in mind, what are the states doing to regulate UAV usage?

State legislatures are debating if and how UAVs should be regulated by taking into account the benefits of their use, concerns about privacy, and impact on local economies. During the 2016 legislative session, ten states have passed fourteen bills relating to.  Here is the current breakdown of state legislation passed this year:

Idaho: SB 1213 prohibits the use of UAVs for hunting or locating game animals, game birds, and furbearing animals.

Indiana: HB 1013 permits the use of UAVs to photograph and video images of a traffic crash site on a public street or public highway.  Under this law, law enforcement officers and governmental entities may use UAVs to investigate criminal activity after receiving a court-issued warrant.  Indiana also passed HB 1246, which prohibits the use of UAVs to scout, locate, or detect game during hunting season.

Kansas: SB 319 expanded its definition of harassment in the Protection from Stalking Act to include "any course of conduct carried out through the use of an unmanned aerial system over or near any dwelling, occupied vehicle or other place where one may reasonably expect to be safe from uninvited intrusion or surveillance."

Oklahoma: HB 2599 prohibits the operation of UAVs within 400 feet of a critical infrastructure facility, defined in the law to include petroleum refineries, electrical plant, chemical manufacturing centers, water intake or treatment facilities, damns, and telecommunications infrastructures like cell towers.

Oregon: Under HB 4066 is one of the nation’s most comprehensive UAV laws.  First, the law deems the operation of a weaponized UAV as a Class A misdemeanor.  Second, reckless interference with an aircraft through use of a UAV can be criminally prosecuted.  Third, public bodies operating UAV are required to maintain detailed policies and procedures with respect to retention of data collected by UAV.  Fourth, the law prohibits use of UAS to invade personal privacy.  Finally, the law prohibits use of UAV near correctional institutions and other critical infrastructure.  Oregon also passed SB 5702, a law specifying the fees for registration of UAV.

Tennessee: SB 2106 criminalizes the flying of a UAV, for the purpose of conducting surveillance or gathering information about a critical infrastructure, within 250 feet of that critical infrastructure.  A second law, HB 2376, allows individuals to use UAV on behalf of both public and private higher education institutions.

Wisconsin: Similar to other state laws enacted in 2016, Wisconsin’s SB 338 prohibits use of UAVs to interfere with hunting, fishing, or trapping game.  AB 670 prohibits the operation of UAVs in areas surrounding correctional facilities.

Currently, Ohio has not passed a specific law regulating UAS or UAV. However, two years ago, Ohio did create the Ohio Aerospace and Aviation Technology Committee to promote the research and development of UAVs.   FI&C has been actively tracking developments in this space, with Erin Rhinehart and Scot Ganow participating in panel discussions on the use of UAVs in a variety of sectors and implicating issues, such as privacy.  Continuing in this spirit, FI&C’s Scot Ganow will join partner Jeff Cox in a panel discussion at the Federal Bar Association’s Annual Meeting in Cleveland. Jeff will moderate a panel in which Scot will speak on privacy related issues, and will be joined by Dr. Andrew Shephard of Sinclair Community College’s recognized UAS program and an FAA representative.  With the final rules due out this summer, there promises to be plenty to discuss.