What Is a Reasonable Expectation of Privacy? Part Deux. The Supreme Court Reconsiders the Katz Standard. 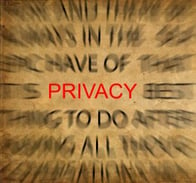 This time last year, I questioned what is a reasonable expectation of privacy today?  In that blog, I discussed one of the seminal cases in privacy and 4th Amendment law: U.S. v. Katz.  In Katz, the Supreme Court of the United States defined the standard for one's right of privacy against state action in the "reasonable expectation of privacy."  In Katz, the evidence comprised an audio recording of one side of a telephone call in which Katz was placing a wager. In holding the recording evidence inadmissible, the Court said “The Government’s activities in electronically listening to and recording the petitioner’s words violated the privacy upon which he justifiably relied while using the telephone booth and thus constituted a ‘search and seizure’ within the meaning of the Fourth Amendment.”

In last year's blog, I questioned whether such a standard is reasonable or even possible anymore, as technology has invaded so much more to blur the confines of an area in which one could have a subjective or reasonable expectation of privacy.  In the past year, we have seen Google Glass come to market, the NSA surveillance story break, and even the Donald Sterling matter, in which he was secretly recorded making racist statements, all of which force the issue that technology's integration with our personal lives is demanding a redefinition of this legal standard.  The time may very well have come for a re-consideration of this judicial standard—at least in the criminal law context.

In 2012, Justice Sotomayor introduced what many were calling a signal that the Court would indeed need to reconsider the Katz standard.  In United States v. Jones, the defendant Jones was arrested and convicted on a drug charge.  Amongst the evidence used in the conviction was GPS tracking information sent from a GPS transmitter affixed by the police to Jones's car.  Jones challenged the admissibility of evidence as seized in violation of his 4th Amendment right to privacy.  Even though someone understands that people may see them driving a car in public, thereby negating a reasonable expectation of privacy, the depth of the knowledge provided by a tracking device (pinpointing one's location to the nearest degree with a time stamp over hours)  was a bridge too far for the Supremes. The Court agreed with Jones and ruled the evidence inadmissible. In her consenting opinion, Justice Sotomayor wrote “It may be necessary to reconsider the premise that an individual has no reasonable expectation of privacy in information voluntarily disclosed to third parties… This approach is ill-suited to the digital age, in which people reveal a great deal of information about themselves to third parties in the course of carrying out mundane tasks.”

Now, in April of this year, the Supreme Court heard oral arguments in two cases in which the police seized information from cell phones as part of an arrest.  In United States v. Wurie, the defendant was arrested on suspicion of selling crack cocaine. While Wurie was in police custody, the police took his phone. The police used a reverse look up on a phone number in the phone to locate the defendant's house, which they searched under warrant.  The search resulted in the seizure of crack cocaine, marijuana and a weapon.  A California appeals court threw out the evidence stating the warrantless cell phone data searches were “categorically unlawful.” As required under 4th Amendment jurisprudence, police can only conduct such a warrantless search when the police have reason to be concerned with the destruction of evidence or a concern for police safety.  The court said the state proved no such concerns were reasonable.

In Riley v. California, the defendant was pulled over for an expired car registration. In addition to finding weapons under the hood of the car and confirming Riley's license was suspended, the police also found language in Riley's smart phone that suggested he might have gang connections.  Police also found a photo that linked him to a crime the police were investigating. Riley was ultimately convicted on murder and other charges and sentenced to prison, a conviction which was upheld.

Because of the disparate outcomes and seemingly similar actions by the police in each case, the Supreme Court agreed to hear the case.  The Justices' comments during oral arguments suggest the reconsideration of the Katz standard is underway and we might see a change to include protection for phones included with "persons, houses, papers and effects."  “What is the reasonable expectation of privacy of a person in 2014 who has a cell phone . . . on his or her person?” Justice Samuel A. Alito Jr. asked. Justice Kagan added, “Most people now do carry their lives on cell phones, and that will only grow every single year as, you know, young people take over the world.”

Any change in the standard would have to include bright lines for the police to recognize when such a search of a phone is warranted and when it is not.

Advocates for the defendants argued understandably that searches would know no reasonable end, and without clear standards for what is in and out of bounds, police would continue to overstep the 4th Amendment.  The government argued that there should be no change in Supreme Court precedent which effectively says anything a person is carrying at the time of arrest is subject to lawful search for safety concerns and for the potential to lose evidence through remote wiping of phones.

The Court will rule in June.  Now, again, this decision is limited to the 4th Amendment and criminal law.  However, the fact that the Supreme Court is considering revisiting and potentially changing such a long standing legal standard tends to show what society, as a whole, has to consider.  Society, like any collective, must establish its own norms for what is reasonable and what is not.