One That Got Away: How a California Court Determined That a Bee is a Fish 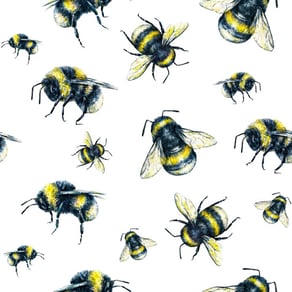 The decision in Almond Alliance of California v. Fish and Game Commission, (2022) 79 Cal.App.5th 337, which held that, for purposes of California's environmental statutes, the term "fish" includes bumblebees, has sparked ridicule from both outside and within the legal world.  The purpose of this blogpost, though, is not to mock – instead I want to identify where the court's train of reasoning went off the track, and to use the case as a vehicle to discuss how basic logic relates to statutory interpretation.

The plaintiffs in Almond Alliance argued that the Defendant Fish and Game Commission "exceeded its statutorily delegated authority" when it designated four species of bumblebee as "under consideration for listing as endangered species" based on statutory provisions applicable to fish. 79 Cal.App.5th at 341.  Thus, "[t]he issue presented here is whether the bumble bee, a terrestrial invertebrate, falls within the definition of fish, as that term is used in the definitions of endangered species" in California's Fish and Game Code.  Id.  The court concluded that the power to regulate fish does indeed include the power to regulate bees.

How did the court reach that conclusion?  The bulk of the opinion is devoted to summarizing the legislative history of the California Endangered Species Act of 1984 and its 1970 predecessor to support the court's contention that the term "fish" in the Act is not limited to vertebrate animals.  Such an exercise is puzzling, though, for two reasons.  First, the word "invertebrate" is expressly part of the statutory definition of fish.  Section 45 of the general definitions section of California's Fish and Game Code defines "fish" as follows:  "'fish' means a wild fish, mollusk, crustacean, invertebrate, amphibian, or part . . . of any of those animals."  (Emphasis added.)  While the statute does not say "any and all" invertebrates, or "each and every" invertebrate, a dive into the legislative history to establish that the statute can cover at least some invertebrates seems unnecessary, given the use of the word in the statute.

The second puzzling aspect of the court's focus on invertebrates is that the inclusion of the word "invertebrate" in Section 45's definition of fish does not logically prove anything about whether the statute authorizes the Commission to declare the bumblebee to be an endangered species.  To articulate this point, I dusted off my copy of an excellent book on logic for lawyers, aptly titled "Logic for Lawyers."  As the author, Judge Ruggero Aldisert, notes, legal argument is based largely on deductive reasoning, following the form of a logical syllogism, such as:

Now, when you read the opinion in Almond Alliance, the syllogism toward which the court seems to be headed is as follows:

However, that syllogism is invalid, due to the fallacy of "the undistributed middle."  At least one of the statements concerning the middle term of the syllogism must be "distributed," i.e., a statement that is true of the entire category, such as "all A."  Here, although statement No. 1 includes a distributed term, in that it makes a statement applicable to all bees, "bees" is not the middle term.  The middle term (by definition) is the term that appears in both the first and second statements, which, here, is "invertebrates."  Yet, there is no categorical statement in the syllogism about invertebrates, since, as noted above the literal words of the statutory definition should not be read to say "all" invertebrates are "fish" -- only that some invertebrates can be considered "fish."  The fact that some invertebrates are included in "fish" under the statute does not force a conclusion that a particular type of invertebrate is included.

The court's opinion recognizes that gap in logic, eventually, since the final part of the opinion is a section with the heading "the Commission may list any invertebrate [as an endangered species]," 79 Cal.App.5th at 359 (emphasis added), in which the court endeavors to explain that all invertebrates, including land-based species of bumblebees, are fish.  The court concedes that "the term fish is colloquially and commonly understood to refer to aquatic species" (id. at 341), but cites the canon of statutory construction that, even though courts "generally give words their usual and ordinary meaning . . . [w]here . . . the Legislature has provided a technical definition of a word, we construe the term of art in accordance with the technical meaning" (id. at 353).

However, I would not consider the definition of "fish" used in Section 45 to be "technical."  The statute's definition of "fish" is clearly meant to encompass some creatures that, under a strict, scientific definition, would not be considered fish, but nevertheless live "in aquatic environments" (id. at 359), such as a "mollusk" or "crustacean."  In other words, the statute takes a decidedly non-technical approach, using a more informal, layperson-type definition of fish rather than a zoologically correct one.  Thus, it is incorrect for the court to say it relied on a "technical" meaning, and, at any rate, it still has the problem that non-aquatic animals are not mentioned in section 45.

The court's only real support for giving Section 45 an expansive enough interpretation to include bees is that, by operation of another statute, there are non-aquatic, "terrestrial" species that are deemed "threatened species."  The court focuses in particular on the Trinity bristle snail, which is "a terrestrial gastropod that is both a mollusk and an invertebrate" living near the Trinity River. Id. at 344.  In 1980, the Commission added the Trinity bristle snail to its list of rare animals.  Id. at 345.  Section 2067 of the Fish and Game Code provides that "[a]ny animal determined by the commission as 'rare' on or before January 1, 1985, is a 'threatened species.'"  Due to section 2067, the Trinity bristle snail's 1980 appearance on the "rare" species list automatically makes it a "threatened" species under the 1984 Act.  The court leans heavily on that fact to back into a conclusion that the definition of "fish" should cover terrestrial invertebrates such as insects.  79 Cal.App.5th at 355.

However, there are several problems with this reasoning.  First, similar to the point above about "invertebrates," the inclusion of some terrestrial species in the Commission's scope of authority does not mean every terrestrial species can be included.  A snail is not a bee.

Second, the language of the statute cited in support of the conclusion that any terrestrial invertebrate species is covered by the definition of fish is not as strong as the court contends.  The court asserts that, "by virtue of the express language in section 2067, the Trinity bristle snail – a terrestrial mollusk and invertebrate – is a threatened species under the Act and could have qualified as such only within the definition of fish under section 45."  Id. at 359 (emphasis in original).  However, the better reading of section 2067 is that it simply chooses not to undo the Commission's previous designations.  The legislature's acceptance in section 2067 of the status quo as to designations that had occurred before 1985 is not necessarily an endorsement of an expansive interpretation of "fish" after 1985.  Rather, section 2067 should be read as merely creating a specific exception to the general definition of fish for pre-1985 designations.  "'It is well settled … that a general provision is controlled by one that is special, the latter being treated as an exception to the former.'"  San Francisco Taxpayers Ass'n v. Bd. of Supervisors, 828 P.2d 147, 150 (Cal. 1992) (quoting Rose v. State of California, 123 P.2d 505, 512 (1942)).

The third and last major problem with the court's reasoning as to coverage of "any" invertebrate is its selective use of factors that tend to point toward an expansive definition (like, arguably, the second sentence of section 2067) while dismissing other, stronger indicia that the Act should not be interpreted to apply to land-based insects.  For example, in 1980, California's Office of Administrative Law (which is tasked with determining whether regulations issued by other administrative agencies comply with the law (Almond Alliance of California v. Fish and Game Comm'n at 344 fn.5)) disapproved of a regulation of the Fish and Game Commission that would have named two species of butterfly as rare and endangered, since in its view insects did not fall under the statutory definition of fish.  Id. at 344.  In 1998, the California Attorney General issued an opinion that insects could not be listed as threatened or endangered species under the Act (id. at 350-51), and in particular, noted that, while pursuant to section 2067 certain pre-1985 designations of species were "grandfather[ed]" in, no species of insects fall into that category of pre-1985 designations (id.).

These contrary indicia supporting a narrower interpretation become more critical if one were to adopt what I would call a "Carl Sagan" approach in the context of statutory interpretation.  The late Professor Sagan, a popular TV host and writer on scientific subjects, said that he followed the principle that extraordinary claims -- alien spaceships, Yetis, ESP -- require extraordinary evidence.  Saying "fish" means "bee" is an extraordinary claim.  Yet, in Almond Alliance, the court does not provide extraordinary evidence, from either the legislative history or the wording of other statutes, to refute an ordinary understanding of what "fish" means.  The opinion is the judicial equivalent of claiming Bigfoot is real based on a blurry shape in a single photo.

One attorney has referred to the opinion in Almond Alliance as "35 pages of tortured logic" and says it "reads like a parody.  I would not go that far, but it does provide a striking example of how faulty reasoning and analysis can lead to statutory interpretation that strikes the casual observer as absurd.