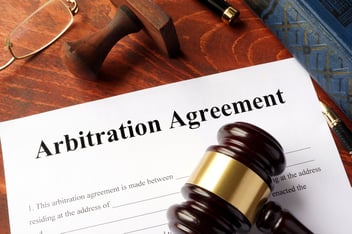 The Supreme Court recently heard arguments in a case that could add further definition to the nearly 100-year old federal law that sets bounds for enforcement of private arbitration provisions in employment contracts.  The March 28, 2022 arguments in Southwest Airlines Co. v. Saxon, U.S. Supreme Court, No. 21-309, addressed whether baggage handler supervisors who had sued the airline for overtime pay were performing job functions that were "engaged in interstate commerce" and thus fell within an exemption from being forced to arbitrate such claims under the 1925 Federal Arbitration Act ("FAA"), 9 U.S.C. § 1.

The justification for federal enforcement of arbitration agreements is that the parties have chosen to arbitrate their disputes rather than litigate them.  Am. Express Co. v. Italian Colors Rest., 570 U.S. 228 (2013).  Indeed, the FAA has been read by the Supreme Court to enforce private arbitration provisions in employment contracts, and in consumer/retailer form agreements, despite contrary state and other federal laws that would permit court-filed lawsuits and class actions, which employees and consumers would generally favor instead of arbitration.  Indeed, these binding arbitration provisions have become routine and ubiquitous in both such contexts.

So, back to our baggage handlers, and their assertion that they should be permitted to file suit in court rather than be forced to arbitrate . . . . While the FAA mandates enforcement of contractual arbitration provisions, it exempts contracts of employment of "seamen, railroad employees, or any other class of workers engaged in foreign or interstate commerce."  Although the bounds of those covered by this exemption may have been fairly clear in 1925, the notion of who is "engaged in foreign or interstate commerce" in our ever-evolving and integrated global logistics environment is proving more elusive.

Southwest Airlines came before the Supreme Court after a panel of the U.S. Court of Appeals for the Seventh Circuit ruled that a ramp supervisor at Chicago's Midway Airport fit within the FAA's workers in interstate commerce exemption despite the fact that her job did not require her to cross state lines.  In the Seventh Circuit's estimation, the loading of freight luggage -- which luggage would travel interstate -- was a sufficient nexus with interstate commerce for the supervisor to pursue her claim for overtime relief in court.

At the Supreme Court's March 28, 2022 hearing, questions about where to draw the line on which workers would or would not be able to avail themselves of the exemption came from Justices across the political continuum, and included questioning, among other things, about the definition of "stevedores," "railroad employees," and "wharfage" as those terms would have been understood and applied in 1925 when the FAA was enacted.  Justices Gorsuch, Kavanaugh, Kagan, Sotomayor, Thomas, and Chief Justice Roberts all made inquiries reflecting the challenge of the scope of the exemption in the present-day interstate commerce context.

Whether or not Ms. Saxon, the baggage supervisor, ultimately is forced to arbitrate her claim, the advent of internet commerce and retailers operating in the online environment, coupled with the extraordinary increase in logistics of moving product both interstate and internationally, means that the Court's efforts to draw lines as to what job functions are or are not within the FAA exemption are of great consequence.  Whether the court uses this case to address that point or limits its decision to the specifics of the baggage loading supervisor's plight remains to be seen.  Other cases are moving through the federal courts that may prove a more fertile opportunity for the Supreme Court to rule on the scope of the exemption in circumstances that present a closer call than the ramp supervisor context.

What is certain, however, is that both employers and employees will be watching closely to see where the courts and Congress are headed in expanding or contracting the enforcement of these arbitration provisions.  Particularly for large employers, an expansive treatment of workers engaged in interstate commerce, and thus able to avail themselves of the FAA's exemption, presents a significant risk of exposure to large-scale class action litigation and its attendant risks and costs.  Regardless (or perhaps, because) of the Court's steady enforcement of contract arbitration provisions, there seems to be percolating bipartisan discontent with the perceived (or actual) inequity of such clauses, particularly when applied in certain egregious circumstances.  Indeed, on March 3, 2022, President Biden signed the "Ending Forced Arbitration of Sexual Assault and Sexual Harassment Act of 2021," which eliminates mandatory arbitration of workplace sexual assault and harassment claims.  That legislation moved through the House of Representatives with 77% approval and quickly passed the Senate on a voice vote.  Whether the Congress will seek to enact other laws causing further retrenchment of mandatory arbitration provisions, particularly in the employer/employee dispute context remains to be seen.

Of further consideration, too, is whether the benefits of private arbitrations, in terms of cost, time to resolution, and non-public binding outcomes remain an attractive alternative as compared to traditional court litigation.  Courts have become increasingly proficient in employing mediation and summary disposition tools, and in some instances, the predictability of that pathway, and the prospect of a precedential outcome, may be a preferred option to private arbitration.