Raise a Glass to the Design Patent: A Comparison of Patent and Trademark Protections for Products Both Functional and Ornamental (Authored by Faruki Law Clerk Meghan L. Savercool) 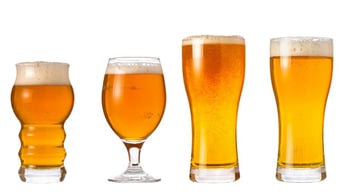 In 2007, after months of research and prototype-testing, Boston Beer chairman Jim Koch unveiled what he dubbed the "perfect pint glass."  It has a rounded shape in the middle, with a narrow top and outward turned lip, all of which purportedly serves to retain hop and aroma and to highlight the sweetness of Boston Beer's most famous brew, Samuel Adams Boston Lager.  The shape of the glass also helps the beer maintain proper temperature and its base includes etchings that create bubbles to enhance the flavor and aroma.

Given the extensive time and thought that went in to developing the glass, Boston Beer logically sought to protect its intellectual property.  Sam Adams' own marketing highlighted only the function of the glass and not the visual aesthetics.  However, rather than seeking a traditional utility patent, which protects "new and useful" inventions (35 U.S.C. § 101), the company obtained a series of design patents, which protect strictly ornamental features on a functional product. 35 U.S.C. § 171. Design patents offer several advantages that likely impacted the company's decision to forgo a traditional utility patent.

The majority of patents issued by the United States Patent and Trademark Office (USPTO) are utility patents. An individual or organization may apply for a utility patent for:  (1) a process, (2) a machine, (3) a manufacture, or (4) a composition of matter. 35 U.S.C. § 101.  These broad categories could cover nearly any conceivable invention, although it must be new, novel, non-obvious, and useful.  The "useful" requirement means that inventions must have practical and beneficial utility in the real world.  A utility patent might protect a life-saving medical device, a 5-ton conveyor belt, or a miniature umbrella that attaches to a beer bottle. It would not, however, cover artwork, the written words in a book, or an abstract idea.

Whereas a utility patent protects a functional invention in its entirety, a design patent protects only certain visual features of a functional product.  To illustrate, Boston Beer obtained four separate design patents, and each protects just one small aspect of the pint glass design.  Additionally, a major 2012 dispute between Apple and Samsung involved three separate design patents Apple held covering the rectangular shape, rounded edges, and reflective surface of its iPhone.  To qualify for design patent protection, a design must be ornamental, novel, and non-obvious.  The novelty and obviousness of a design are judged through the lens of an ordinarily skilled designer of similar products.  The "ornamentality" requirement is generally the most difficult element to establish and means that the patented aspects must be decorative and not governed strictly by function.  Rosco, Inc. v. Mirror Lite Co., 304 F.3d 1373, 1378 (Fed. Cir. 2002).

Although others have sought utility patent protection for distinct glasses for wine and spirits, Boston Beer was able to avoid the more stringent and expensive utility patent process.  The company succeeded in convincing the USPTO that, despite touting its benefits to taste and aroma, the pint glass design also had ornamental aspects and thus was not purely functional.  Others may be realizing the wisdom of Boston Beer's approach.  In fact, in recent years the USPTO has seen an uptick in design patent applications.  Given the many advantages design patents hold over utility patents, that trend is likely to continue.