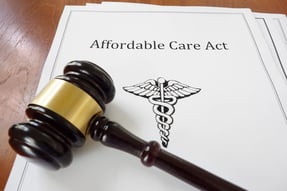 On June 17, 2021, the Supreme Court, in California, et al. v. Texas, et al., ruled on the third attempt to dismantle the Affordable Care Act ("ACA"). In a 7-2 opinion the Court dispatched a coalition of Texas and seventeen other states, along with two individuals, who sought to have the Court strike down the law.[1]  The opinion never reached the heart of the ACA, however, as the Court ruled that the plaintiffs never had standing to bring the challenge in the first place.[2]

The plaintiffs' case rested on the provision of the ACA that implemented a penalty for any applicable individual who did not obtain minimum health care coverage, known as the "essential coverage provision."[3]  In 2017, Congress amended the ACA to reset the penalty for all individuals to $0.[4]  The following year, Texas, joined by a number of other states, sued the Secretary of Health and Human Services and the Commissioner of the Internal Revenue Service, among others.[5] [6]  The plaintiffs sought a declaration that the minimum essential coverage provision was unconstitutional now that it was unenforceable through a penalty.[7]  Moreover, the plaintiffs sought a finding that the essential coverage provision was not severable from the rest of the ACA and, therefore, the entire act must fall.[8]

The Court did not reach the plaintiffs' constitutional arguments because the majority determined that they did not have standing to bring the claim.  Standing is the basic principle that a plaintiff can only bring a case if they can "allege personal injury fairly traceable to the defendant's allegedly unlawful conduct and likely to be redressed by the requested relief."[9]  Simply put, to have standing, you must have been hurt by something the defendant did and the Court must be able to fix it.

Writing for the majority, Justice Breyer pointed out that setting the essential coverage provision's penalty to $0 does not injure the States or the individual plaintiffs.  The individual plaintiffs argued that the provision commands them to buy health insurance.[10]  As Justice Breyer writes, however, there is no means of enforcement and, therefore, no possible government action connected to the cost of the plaintiffs' decision to purchase health insurance.[11]  Moreover, since the provision is unenforceable, there is no relief the Court could grant.[12]

The State plaintiffs, on the other hand, argued that they had been injured in the form of the increased use of their state-operated medical insurance programs and increased administrative expenses related to the minimum essential coverage provision.[13]  The Court rejected the first argument because injuries predicated on the acts of third parties are reliant on the third party acting in predictable ways.[14]  The Court held that the States had failed to demonstrate why the unenforceable provision would cause residents of their states to enroll in an insurance program they had previously forgone.[15]

For practical purposes, the Court maintained the status quo for the ACA.  The victory for California and its coalition of states was purely procedural and does not add any substantive case law to bolster the ACA.  On the other side, challenges to the ACA are now 0 and 3.  It would appear, for the time being, that any further challenges to the ACA will return to the halls of Congress.  (The true winners in this case are likely civil procedure professors who will have a standing case to add to the syllabus this fall.)

[6] The Trump Administration decided not to defend the ACA, therefore, California and fifteen other states and the District of Columbia intervened to defend the law.  The House of Representatives also intervened at the appellate stage.