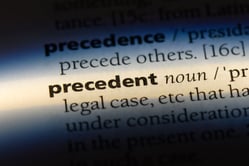 This change in Georgia's rules on the precedential value of opinions brought to mind one of Ohio's, perhaps, "weird" precedential value rules.  As most know, all Ohio trial courts and intermediate courts of appeals are required to accept and enforce the law as promulgated by the Ohio Supreme Court in its decisions.  Indeed, as one court succinctly explained,

But what exactly is the law as promulgated by the Ohio Supreme Court in its opinions? Up until July 1, 2012, the Ohio Supreme Court had what was called the "syllabus rule." Under this "syllabus rule" or "syllabus law," the only binding law was that which was set forth in the syllabus of the Ohio Supreme Court's opinions.  Former Rule 1(B) of the Supreme Court Rules for the Reporting of Opinions stated that "the syllabus of a Supreme Court opinion states the controlling point or points of law decided in and necessarily arising from the facts of the specific case before the Court for adjudication."  Therefore, the only controlling law with any precedential effect was what was stated in the syllabus.  The body of the opinion or the opinion itself was considered only dictum, and it had only persuasive value; it was not precedential, and it was not binding on the lower courts.  If there was any conflict between a statement in the opinion itself and the syllabus, the syllabus controlled.  (Interestingly, if an intermediate appellate court opinion contained a syllabus, that syllabus was not the law; rather one had to look to the opinion itself to determine the statement of law set forth in that decision.  See, State v. Linebaugh, 3d Dist.  Logan No. 8-18-32, 2019-Ohio-320, ¶ 19 n.3).

While the "syllabus rule" seemingly should have made it easy for the courts below to figure out and follow the binding law, it was not always the case.  What if a Supreme Court opinion had no syllabus? What weight, if any, could or should be given to dicta?  What if there were conflicting Supreme Court opinions?

For example, in General Tire, Inc. v. Mehlfeldt, 9th Dist. Summit No. 19269, 1999 Ohio App. LEXIS 2970, at * 21 (June 23, 1999), the court there took the approach that because there was no syllabus, the particular Supreme Court decision was not binding law that it had to follow and the case was limited to its facts.  In Ball v. Guar. Nat'l Ins. Co., 144 Ohio App.3d 145, 147-48, 759 N.E.2d 830 (12th Dist.2001), however, the court there decided to adopt and follow the reasoning on constitutional challenges to an Ohio house bill found in the Ohio Supreme Court's opinion in Beagle v. Walden, 78 Ohio St.3d 59, 676 N.E.2d 506 (1997), even though "Beagle was a plurality opinion, not a per curiam opinion, and it did not include a syllabus.  The only issue agree on by a majority of the justices was the constitutional challenge under the one subject rule.  Although the written opinion in Beagle does not have precedential value, several appellate courts have expressly adopted the reasoning of the plurality opinion" and "we agree."

Similarly, in State v. Boggs, 89 Ohio App.3d 206, 213, 624 N.E.2d 204, (4th Dist.1993), the court stated that although it understood that the discussions of matters or issues found in the text of an Ohio Supreme Court opinion are merely dicta if not carried into the syllabus and therefore are not binding, it was still going to follow the dicta because the Supreme Court decision was unanimous.  It further added: "the reality of appellate practice is that this court, and others, frequently rely on Supreme Court dicta for resolution of issues.  Any court which disregards the Supreme Court's discussion of certain issues merely on the basis that it was not carried into the syllabus would be treading on dangerous and unstable ground.  A healthy regard should be maintained for considered dicta."  Id.

"In Dresher v. Burt (1996), 75 Ohio St.3d 280, 295, 662 N.E.2d 264, the Ohio Supreme Court modified paragraph three of the Wing [v. Anchor Media Ltd. of Texas (1991), 59 Ohio St.3d 108, 570 N.E.2d 1095] syllabus, limiting it to account for, among other things, the burden Civ.R. 56 places upon a moving party…. Nevertheless, in State ex rel. Zimmerman v. Tompkins (1996), 75 Ohio St.3d 447, 449, 663 N.E.2d 639, decided after Dresher, the Court cited paragraph three of the syllabus of Wing as authority despite the apparent modification by Dresher. Dresher, however, is a plurality opinion [with no syllabus]. Additionally, Euclid, the moving party in this case, unlike the movant in Dresher, did not fail to identify for the trial court the elements of Budai's claim lacking evidentiary support in the record. Therefore, Wing continues to be good law for purposes of our analysis." (internal quotations omitted).

In cases where there appeared to be conflicting Ohio Supreme Court opinions, as one court explained, "it is the obligation of this court to follow the Supreme Court's pronouncements of law and, if possible, to reconcile them."  Holm v. Smilowitz, 4th Dist. Athens No. CA 1428, 1990 Ohio App. LEXIS 3051, at *12 (July 25, 1990).  In Holm,

"[t]he question presented herein is what criteria are to be applied by trial courts in deciding to award the dependency exemption to noncustodial parents in a divorce action. In answering this question, we must attempt to resolve an apparent conflict in decisions rendered by the Ohio Supreme Court. In Hughes v. Hughes (1998), 35 Ohio St.3d 165, at paragraph one of the syllabus, the court held as follows: As part of the division of marital property in a divorce proceeding, a domestic relations court may award the dependency exemption…to the noncustodial parent…." Id. at *5. (internal quotations omitted).

In Bobo v. Jewell, 38 Ohio St.3d 330, 332, 528 N.E.2d 180 (1988), however, the Supreme Court opinion included the following statement: "if a trial court exercises the authority to allocate a child dependency deduction to the noncustodial parent, the record must show that the interest of the child has been furthered."

"Thus appears the conflict. Under the syllabus in Hughes, the dependency exemption is treated as a marital asset and, accordingly its award to either party would be viewed in the same context as any other division of marital property…. Conversely, the decision in Bobo states that the record must show that the interests of the child to have been furthered… [t]hus the tax exemption is viewed, not in the context of marital property, but rather as an incident to child support."

Holm, 1990 Ohio App. LEXIS 3051 at *7-8.  In deciding to follow the syllabus in Hughes, the court in Holm reiterated that "it is well settled that the syllabus of a Supreme Court opinion states the law of Ohio….In contrast, no part of the court's opinion in Bobo, concerning the dependency exemption, was carried into the syllabus of that case."  Id. at *13-14.  The court noted that "observations by way of obiter dicta are not binding on inferior courts" and

"[s]tatements unnecessary to [the] decision and not carried into the syllabus are not binding….These principles are particularly evident in Bobo where Justices Douglas and Wright concurred only in the syllabus and judgment and Chief Justice Moyer only concurred, in part, with the syllabus and judgment. In that the syllabus in Bobo concerns only the rendering of a court order under R.C. 3111.13(C) pursuant to the best interests of the child, it is doubtful that that portion of the opinion, relied upon by appellant, was intended to replace Hughes as the law of Ohio."

While under the old "syllabus rule" any inconsistencies in the opinion and its syllabus were supposed to be resolved in favor of what was stated in the syllabus, under the current rules, there is no guidance on how to resolve conflicts or inconsistencies that may exist between the syllabus, text, and/or footnotes.  This raises the question then of what really is the binding law in Ohio, if a Supreme Court of Ohio opinion contains a syllabus and then text that does not align or is somehow inconsistent or in conflict.  It arguably gives counsel some opportunities for creativity and lower courts some leeway when deciding the cases before them.  Note, however, that the current rule applies only to those cases decided on or after July 1 2012; the "syllabus rule" still applies to Supreme Court opinions issued prior to July 1, 2012.

Here are some other Ohio Supreme Court reporting rules applicable to opinions from the Ohio courts of appeals and the Ohio Court of Claims that may useful to keep in mind:

* Rep.Op.R. 3.1 Definition of "opinion": "opinion shall not include orders on procedural matters, orders without opinions, and judgment entries under App. R. 11.1(E)."

* Rep.Op.R. 3.4: "All opinions of the courts of appeals issued after May 1, 2002 may be cited as legal authority and weighted as deemed appropriate by the courts without regard to whether the opinion was published or in what form it was published." (Note: While any district court, whether it be a trial court (Court of Common Pleas) or a court of appeals (e.g., Second District Court of Appeals) may look to another district appellate court decision as persuasive authority, still only Ohio Supreme Court decisions and reported decisions of that district are binding upon the courts in that district. Additionally, (and similar to the now defunct Georgia "physical precedent" rule), it has been held that an appellate court decision in which one judge dissents and one judge concurs in the judgment only has no precedential value. See, e.g., State v. Mushrush, 135 Ohio App.3d 99, 113, 733 N.E.2d 252 (1st Dist.1999). Query whether this proposition is still good, however, for cases decided after May 1, 2002 given the broad language in Rule 3.4).