Supreme Court: Like School on Saturday, an Ambiguous Arbitration Agreement Has No Class (Arbitration) 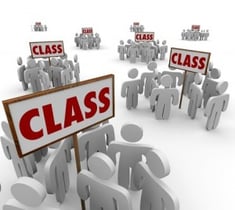 In Lamps Plus, Inc. v. Varela, No. 17-988 (Apr. 24, 2019), the Supreme Court held that because of the "fundamental" differences between individual arbitration and class arbitration -- i.e., a class action claim that is determined in an arbitration proceeding -- it is error for a court to use a traditional tool for contract interpretation (construing an agreement against its drafter) to resolve ambiguous language in an agreement in favor of class arbitration.

As discussed below, the decision in Lamps Plus is the latest in a line of cases that the Supreme Court has decided based largely on the view of a bare majority of the court (the decisions have all been 5-4 or 5-3) that class arbitration is fundamentally inconsistent with the way arbitration is supposed to work.  As also discussed below, while Lamps Plus is good news for corporate entities who want to avoid class actions, it leaves open a couple of procedural avenues by which a plaintiff may yet be able to compel class arbitration.

Lamps Plus involved a complaint filed in federal court by an employee against an employer (Lamps Plus) arising out of a data breach for which the employer was allegedly responsible.  The claims were pled as class claims.  The employer moved to compel arbitration of Plaintiff's individual claims, but not the class claims, which the employer asserted were not arbitrable under the arbitration clause in the parties' agreement.  The district court compelled arbitration and dismissed the lawsuit, but the ruling was a loss for the employer, because the court ordered the arbitration to proceed on a class basis.  Lamps Plus, slip op. at 2.  The employer appealed to the Ninth Circuit, which affirmed, ruling that the arbitration agreement was ambiguous on the issue of whether it permitted class arbitration, and, under California law, ambiguity is construed against the drafter of the provision, in this instance, the employer.  Id. at 2-3.

For purposes of its analysis, the Supreme Court accepted the Ninth Circuit's conclusion that the agreement was ambiguous on the subject of class arbitration, id. at 5, and defined the issue before it as "whether . . . an ambiguous agreement can provide the necessary 'contractual basis' for compelling class arbitration," id. at 6.

In AT&T Mobility LLC v. Concepcion, 563 U.S. 333 (2011), the Court held that a principle of California law, that class action waivers in consumer contracts of adhesion are unenforceable, conflicted with and was therefore pre-empted by the Federal Arbitration Act (FAA).  Applying that California law would force unwilling parties into class arbitration, and undermine the FAA's goal of enforcing arbitration agreements "so as to facilitate streamlined proceedings."  Id. at 344.

The majority in Concepcion treated the concept of class arbitration as almost oxymoronic.  "Requiring the availability of classwide arbitration interferes with fundamental attributes of arbitration and thus creates a scheme inconsistent with the FAA."  Id.  "[T]he switch from bilateral to class arbitration sacrifices the principal advantage of arbitration -- its informality -- and makes the process slower, more costly, and more likely to generate procedural morass than final judgment."  Id. at 348.  Also, "[a]rbitration is poorly suited to the higher stakes of class litigation."  Id. at 350.  In addition, in order to bind absent class members, due process requires adequate representation; notice and a hearing; and a procedure for opting out of the class -- all of which adds to the formality, costliness, and complexity of class arbitration.  Id. at 349.

More recently, in Epic Systems Corp. v. Lewis, 138 S. Ct. 1612, 1619 (2018), the court held that the National Labor Relations Act does not preclude arbitration clauses that waive class actions in agreements between employers and employees.  The court cited Concepcion for the point that "effectively permitting any party in arbitration to demand classwide proceedings despite the traditionally individualized and informal nature of arbitration" would "interfere[ ] with a fundamental attribute of arbitration."  Id. at 1622-23.  Classwide arbitration would shear away "the virtues Congress originally saw in arbitration, its speed and simplicity and inexpensiveness . . . and arbitration would wind up looking like the litigation it was meant to displace."  Id. at 1623.

Given that line of decisions, the court's ruling against class arbitration in Lamps Plus was unsurprising.  The Court stated that "[o]ur reasoning in Stolt-Nielsen controls the question we face today.  Like silence, ambiguity does not provide a sufficient basis to conclude that parties to an arbitration agreement agreed to 'sacrifice[ ] the principal advantage of arbitration.'"  Slip op. at 8.  While the Ninth Circuit had resolved the ambiguity in the parties' agreement by applying the rule of contra proferentem (construing against the drafter), that rule, according to the Supreme Court, is merely "a default rule based on public policy considerations"; it does not determine the intent of the parties, slip op. at 10.  Thus, applying the rule conflicts "with the foundational FAA principle that arbitration is a matter of consent," id. at 11.  ("'[T]he first principle that underscores all of our arbitration decisions' is that '[a]rbitration is strictly a matter of consent.'"  Id. at 7.)

Justice Kagan's dissent noted that the FAA does not displace all state law applicable to enforcement of arbitration agreements.  Section 2 of the FAA (9 U.S.C. sec. 2) provides that arbitration agreements may be held unenforceable under state law "upon such grounds as exist at law or in equity for the revocation of any contract," i.e., on grounds that are applicable to contracts in general.  Section 2 is limited to "preclud[ing] States from singling out arbitration provisions for suspect status, requiring instead that such provisions be placed 'upon the same footing as other contracts.'"  Doctor's Assocs., Inc. v. Casarotto, 517 U.S. 681, 687 (1996).  Justice Kagan argued that the contra proferentem rule is "a garden-variety principle of state law" that "extends to all contracts . . . without disfavoring arbitration," Lamps Plus, Kagan dissent, slip op. at 12, and thus pursuant to 9 U.S.C. sec 2 it should not be preempted.  The majority nevertheless rejected neutral application of state law, because, in its view, that law failed to recognize the heightened level of evidence of consent needed to show that a defendant agreed to class arbitration.

In any event, despite four separate dissenting opinions (by Justices Breyer, Ginsburg, Sotomayor, and Kagan) Lamps Plus is currently, to use a phrase in vogue in judicial confirmation hearings, "settled law."  However, it leaves at least two unsettled issues that could still result in a corporation finding itself in class arbitration.

The first such issue is who decides class arbitrability, a judge or the arbitrator.  In general, "subsidiary" questions of arbitrability of a dispute (e.g., fulfillment of a condition precedent to arbitration, like filing deadlines, or exhaustion of administrative remedies) are left to the arbitrator.  In contrast, "gateway" questions, involving "whether the parties have a valid arbitration agreement at all or whether a concededly binding arbitration clause applies to a certain type of controversy," Green Tree Fin. Corp. v. Bazzle, 539 U.S. 444, 452 (2003)  (plurality opinion), are to be decided by a court, not an arbitrator, "'[u]nless the parties clearly and unmistakably provide otherwise.'"  Howsam v. Dean Witter Reynolds, Inc., 537 U.S. 79, 83 (2002).  Lower courts have held that class arbitrability is a "gateway" question for a judge (e.g., Reed Elsevier, Inc. v. Crockett, 734 F.3d 594, 599 (6th Cir. 2013), cert. denied, 572 U.S. 1114 (2014)), but the Supreme Court specifically noted in Lamps Plus that it has not yet ruled on that question.  Slip op. at 9 n.4 (also noting that it wasn't an issue in Lamps Plus because both parties agreed that, under their agreement, the class arbitrability determination was for the court, not an arbitrator).  Until the issue of "who decides" is resolved by the Supreme Court, a company could find itself before a judge who, when confronted with an arbitration clause that the plaintiff argues unambiguously permits class arbitration, orders the parties to arbitration, and defers the class arbitrability decision to the arbitrator as a "subsidiary" question.

The second open issue that could unexpectedly land a party in class arbitration is the appealability of a court order requiring class arbitration.  That issue was alluded to in Lamps Plus -- in fact, Justice Breyer dissented on the ground that the ruling was unappealable.  The majority, though, held that the ruling was appealable because it occurred simultaneously with the district court dismissing the case.  "[A] final decision with respect to an arbitration," such as a dismissal ruling, is appealable under 9 U.S.C. sec. 16(a)(3).  The Court acknowledged that if a district court, at request of the parties, merely stays the litigation pending arbitration, as is permitted by 9 U.S.C. sec. 3, then that order would be interlocutory and unappealable.  Lamps Plus, slip op. at 4 n.1.  The majority, though, declined to address in what circumstances a court should issue a stay rather than dismiss.  Id.

In either instance, class arbitration may ultimately be deemed to have been wrong after an appeal of a confirmation of the arbitration award (via 9 U.S.C. secs. 10(a), 16(a)(1)), but that would be only after the company has gone through all of the inefficiencies and expense that that class arbitration process entails.  The best way for a company to minimize the risk of either scenario happening is the same as it was before Lamps Plus:  drafting an arbitration agreement that clearly and unmistakably states that the company does not agree to class arbitration.