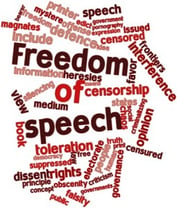 As many of us were celebrating the holidays and ringing in the New Year, the Federal Circuit Court of Appeals was busy overturning thirty years of trademark law.  On December 22, 2015, the United States Court of Appeals for the Federal Circuit issued a monumental decision in favor of free speech:  In re Simon Shiao Tam, Case No. 2014-1203 (Fed. Cir. Dec. 22, 2015).  Specifically, the appellate court held that section 2(a) of the Lanham Act is unconstitutional because it violates the First Amendment.  Section 2(a) prohibits the United States Patent and Trademark Office (USPTO) from registering immoral, deceptive, scandalous, or disparaging marks.  15 U.S.C. §1052(a).  Writing for the majority, Circuit Judge Kimberly A. Moore wrote that:

"It is a bedrock principle underlying the First Amendment that the government may not penalize private speech merely because it disapproves of the message it conveys.  . . .  Courts have been slow to appreciate the expressive power of trademarks.  Words – even a single word – can be powerful."

Simon Shiao Tam is the front man for the Asian-American rock band, The Slants.  Tam named his ban The Slants "to make a statement about racial and cultural issues in this country."  Tam filed an application to register the mark THE SLANTS.  The examiner refused registration under section 2(a), because the mark was likely to disparage people of Asian descent.  The Trademark Trial and Appeal Board agreed with the examiner and affirmed the refusal to register the mark.  Tam appealed.

Tam argued that the TTAB erred in finding the mark disparaging, and that section 2(a) of the Lanham Act is unconstitutional.  The court affirmed the TTAB's decision, but subsequently ordered a rehearing en banc sua sponte.  The court asked the parties to brief the following issue on rehearing:  "Does the bar on registration of disparaging marks in 15 U.S.C. §1052(a) violate the First Amendment?"

The court sought to revisit the holding in In re McGinley, 660 F.2d 481 (C.C.P.A. 1981), which held that the First Amendment is not implicated by a refusal to register a mark since the applicant may use the mark regardless whether it is registered by the USPTO.  Judge Moore observed that, while McGinley's refusal to register does not implicate use, registration of a mark by the USPTO confers significant legal rights and benefits on the owner of the mark (e.g., nationwide notice of ownership; evidence of validity and exclusive ownership of the mark; and heightened legal protection after five years).  It is the prohibition of access to those rights and benefits based on private speech identified as "disparaging" or "offensive" by the government that was particularly troublesome for the majority.

Ultimately, the Federal Circuit agreed with Tam and found that the disparagement provision of section 2(a) is unconstitutional because it violates the First Amendment.  The court reasoned, in part, that "§2(a) does more than discriminate on the basis of topic.  It also discriminated on the basis of message conveyed, [and] 'the idea or message expressed' . . . it targets 'viewpoints [in] the marketplace . . . as a matter of avowed and undeniable purpose, and it does so on its face."  (Citations omitted).  In closing, the majority explained that, "[w]hatever [the court's] personal feelings about the mark at issue here, or other disparaging marks, the First Amendment forbids government regulators to deny registration because they find the speech likely to offend others." The Federal Circuit remanded the case to the Trademark Trial and Appeal Board and, assuming that the mark meets the other requirements for registration, THE SLANTS is likely to be granted trademark registration.

While the Federal Circuit's decision is subject to appeal to the U.S. Supreme Court, In re Tam is significant because it alters over 30 years of Section 2(a) litigation. Registrants may now obtain protection of a wider variety of marks, regardless whether the mark is "politically correct" or not. Recall the struggles over the Washington Redskins marks? In re Tam may have paved the way for the Fourth Circuit's decision regarding whether the football team's marks should be reinstated. Of course, the Fourth Circuit is not bound by the Federal Circuit's decision and, if it elects to take a different course, then there will be a clear circuit split for the Supreme Court to address. The Slants (and its lawyers) have much to celebrate, but it's not last call on this issue yet.